Nanoblading - Everything You Need to Know

Nanoblading is slowly but surely replacing microblading. Find out what is nanoblading, how it’s different from the original technique, and why artists are switching to it. 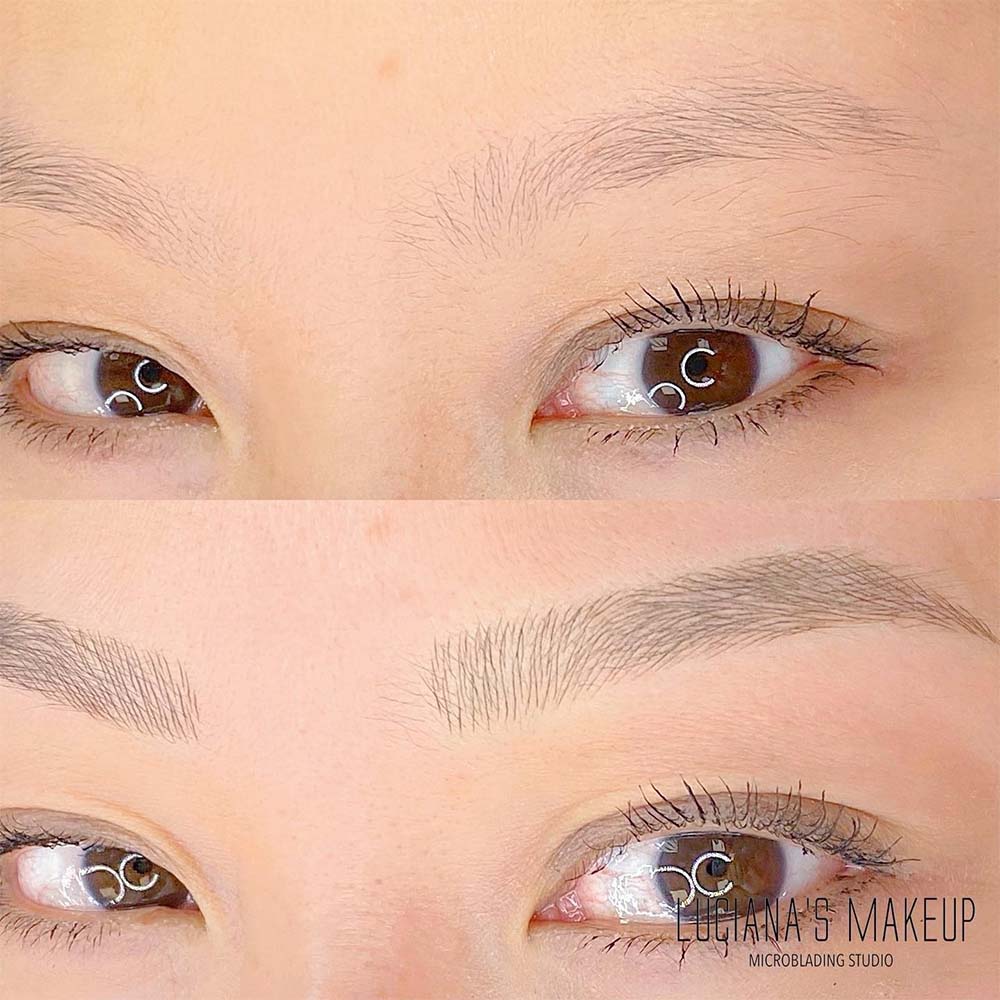 Brow tattoo techniques keep getting better and better! Tools that are now available have been improved by a mile in the past couple of years, and artists have truly perfected their techniques.

The advances in tool development have allowed a new, improved version of microblading to emerge – nanoblading! So, let’s explain everything there is to know about eyebrow nanoblading.

Nanoblading is a manual hairstroke technique for eyebrow enhancement. It’s a form of eyebrow tattoo, where the skin is opened up in tiny, thin incisions in the shape of brow hairs, and PMU pigment is deposited into it.

The treatment is done over 2 sessions. After the initial session, there’s a 6-8 week touch up where the results are assessed and more pigment is added to ensure longevity. Once healed, these incisions look just like natural brow hairs.

The technique can be used to recreate the entire brow arches for clients with very sparse to no brows, or to enhance and modify already full natural brows.

It’s most suitable for normal to dry skin. It’s not ideal for oily skin since the strokes tend to blur and fade faster. Clients with oily skin should be pointed in the direction of machine brows.

The pigments fade over time, and the average longevity is 12-18 months, but it all depends on your skin type, body chemistry, and lifestyle. As the pigments fade, you can refresh the results if you want to keep them, or just let them disappear if you don’t.

What Is the Difference Between Microblading vs Nanoblading?

Sounds just like microblading so far, right? Well, nanoblading actually is a form of microblading, only it’s done with a thinner blade, and hence gives slightly different results.

Eyebrow nanoblading is done with the so-called nano blades, which are thinner than standard. Nano blades are between 0.15 and 0.18 mm in diameter, while microblading blades are usually 0.20 mm.

So the strokes of brow nanoblading look more delicate, they can be placed with more precision and closer together, and the result is a fluffier, more natural-looking brow than microblading could ever give.

But other than this technical difference, everything is more or less the same as it is with standard microblading. Any microblading pattern can be done with a nano blade.

In fact, many artists still call it microblading, even if they’re using a nano blade, to avoid confusion among clients. There’s no special certification for nanoblading, it’s done by microblading artists.

This is down to preference, since the differences are minor. Nanoblading gives thinner strokes, and most people prefer this.

The only significant advantage nanoblading may have is the minimized risk of excessive skin trauma, but a certified, licensed and experienced artist will do a good job with either technique. Problems arise with under-trained and under-experienced artists.

People often confuse nanoblading with nano brows – both clients and artists. This is no surprise, since these 2 terms used to be used interchangeably when referring to machine hair strokes brows up until recently.

But it’s time to make a clear distinction between the 2 terms.

Nanoblading is a form of microblading done with a nano blade.

Nano brows are hair strokes done with a PMU machine. The final look is similar to that of nanoblading (more so than microblading, as the strokes are really thin), but the implementation technique is totally different.

Thanks to machine application, nano brows are more universal, as they’re also suitable for oily skin. The results last slightly longer than micro/nanoblading, and they’re more resilient to pigment migration.

In general, nano brows do have certain advantages over manual techniques, but there’s significantly fewer artists who offer this technique.

Learn more about nano brows in this guide.

The process is the same as with microblading healing, only you might go through the stages slightly more quickly, since the strokes are thinner.

But this difference is almost imperceptible.

Let’s go through the stages of nanoblading healing really quickly:

This is a general timeline – the longevity of the stages may differ from client to client. It all depends on how fast your system works, and this is related to many factors.

It’s also important to note that some clients get more scabbing than others, but as long as it’s not thick, everything is fine.

Thick scabbing, prolonged swelling, redness and extreme itching, pus, rashes or fever may be signs of something going wrong. If you notice any of these symptoms, contact your artist immediately – you might be dealing with allergies or an infection.

To prevent this, make sure you follow the aftercare routine your artist prescribes.

Learn more about micro/nanoblading healing in this guide.

To prevent infection and make sure your brows heal properly, with maximum pigment retention, your artist will prescribe an aftercare routine. You need to follow it as closely as possible so as not to endanger your health and risk ruining the results.

During this time, you should avoid getting your brows wet as much as possible, as well as refrain from applying any product not prescribed by your artist on them – no makeup, no skincare other than the healing balm.

This special care lasts about 2 weeks. After that, the surface healing is over and you don’t have to worry about your brows as much.

Here are the basic rules:

These are the most basic instructions. If your artist prescribes a different routine, make sure to follow that. They may have adapted it specifically to your skin type.

The average nanoblading price is the same as with microblading – around $600. As we said, not everyone considers these techniques 2 different treatments.

However, there’s a really wide nanoblading price range, and you may come across artists who charge as low as $200, and those who charge as much as $2000. It all depends on your location and the exclusivity of the salon.

Learn more about microblading pricing and the factors that determine it in our cost guide. Nanoblading is very similar to microblading – it’s just a more advanced spin-off that uses thinner blades. When nano blades appeared on the market, many artists started switching to them, as they give more delicate results. So many of them still just call it microblading. Therefore, any information you find on microblading also applies to eyebrow nanoblading.