Microblading Touch Up: Why Is It Necessary? 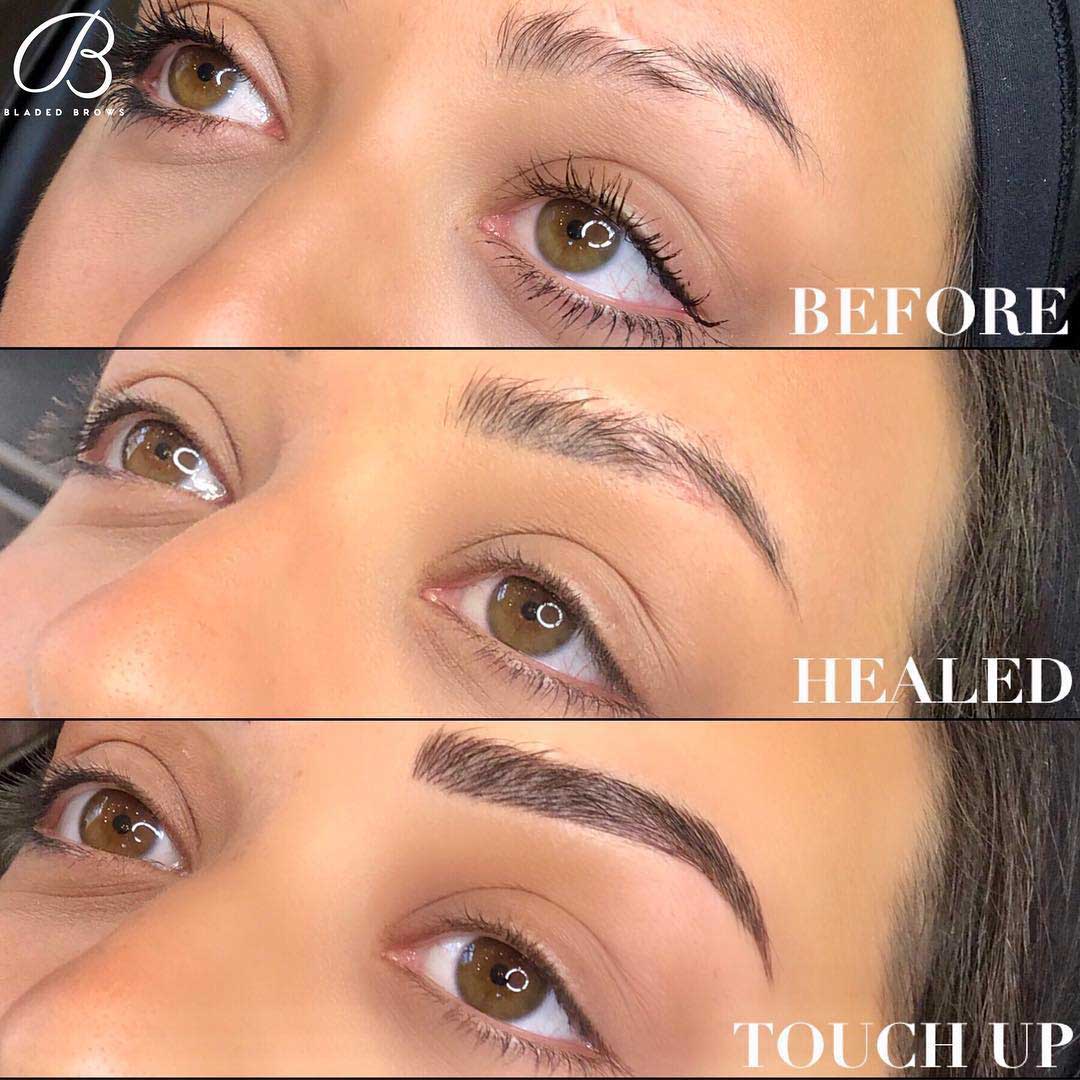 How Long Does It Last

How Long Does It Last

Microblading eyebrows is extremely popular and it gives great results, but only if it’s done properly.

Quality results take time and dedication. After the initial microblading treatment and microblading healing period, you have to have a microblading touch up session. The first touch up is obligatory in most cases.

In order to understand the importance of the first touch up, think of the treatment as a 2-step process. The two go hand in hand and the microblading treatment is incomplete without the follow-up session.

Why Do I Need a Microblading Touch Up?

The skin takes some time to heal after a microblading treatment.

During that period, your eyebrows will go through several phases. First, they will be too dark, then they will start scabbing, and finally, they will lose some of the color and you might think your microblading was unsuccessful.

The color comes back at the end of the healing period, but sometimes it can be uneven and patchy, as some of the pigment could come off with the scabs. Everybody’s skin heals differently and some clients might notice gaps and irregularities after the brows are healed.

The first microblading touch up includes adding additional strokes where the pigment didn’t settle properly. Sometimes. if the artist assesses pigment strokes won’t retain even after the second implementation, they will suggest adding microshading.

The touchup is there to correct all the possible imperfections. Its purpose is to fix what got messed up during the healing period. It’s also an opportunity to make some modifications, in case you feel the color or shape of the arches isn’t quite right yet.

What Happens if You Don’t Touch Up Microblading?

If you don’t get the first touch up microblading, your brows will stay the way they turned out once the skin has healed – uneven and patchy.

If you don’t touch them up ever again, they will fade within 6-12 months.

When Is the First Microblading Touch Up Done?

The first microblading retouch is done after the healing period is over.

The healing time is different for everybody. Generally, it takes from 4 to 6 weeks for the skin to heal, but in some cases, it could take as long as 8 weeks.

The touch up should be done no earlier than 5 weeks and no later than 10 weeks after the first procedure.

Most artists book touch ups about 6-8 weeks after the initial appointment.

You shouldn’t book a touch up appointment before the brows are completely healed and the pigment sets in properly. The skin is at risk of scarring if further trauma is caused before it heals completely.

How Long Does the Microblading Touch Up Process Last?

Microblading touch ups usually last half the time of the first treatment or about an hour.

The touch up won’t last as long as the initial treatment because only certain areas need to be fixed. The time the microblading touch up will take depends on the area that needs to be retouched, and whether only strokes need to be refilled or some shading needs to be added, too. 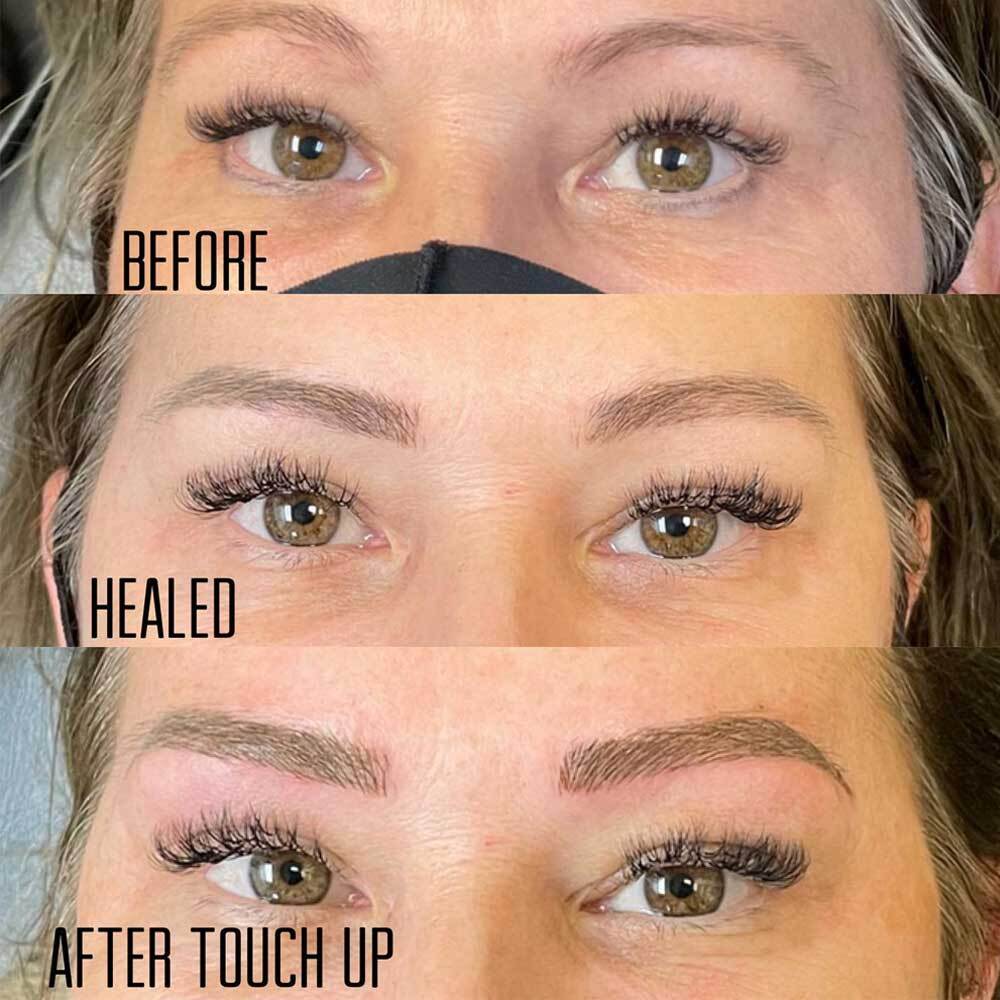 How Long Is the Touch Up Healing Period?

The healing period after the microblading 6 week touch up is much shorter than after the initial process, since the treatment isn’t as intense and there is less trauma to the skin.

It usually takes 5-7 days and it is less complicated than the initial one.

It doesn’t include as much scabbing (although some flaking is possible) and it is not as emotionally exhausting, since the results are visible quite soon and there is less redness, itchiness, and irritation.

What Does the Touch Up Aftercare Include?

The aftercare routine is pretty similar to that of the initial implementation. Clean and moisturize as instructed. Avoid makeup, sweating, sun exposure, long showers, rubbing and scratching the treated area for a couple of days.

How Much Does the First Microblading Touch Up Cost?

Some artists consider microblading a 2-step treatment, so they include the first touch up in the initial price. The average price of the microblading treatment is $600, but it can go up to $2000.

When the first touch up is not included in the price of the treatment, it usually costs $150-$200.

How much is a microblading touch up varies according to the location, reputation, and skillfulness of the artist, the popularity of the salon, and the quality of the products used.

How Long Do Microbladed Brows Last After the Touch-Up?

Even though it is called permanent makeup, microblading does not last forever.

It is only similar to a tattoo, but the pigment is not inserted as deep, and it is gradually broken down by the body. That’s why microblading fades away after some time.

Microbladed eyebrows generally last 12-18 months, but they may last as long as 3 years.

The factors that affect the longevity of microblading are: 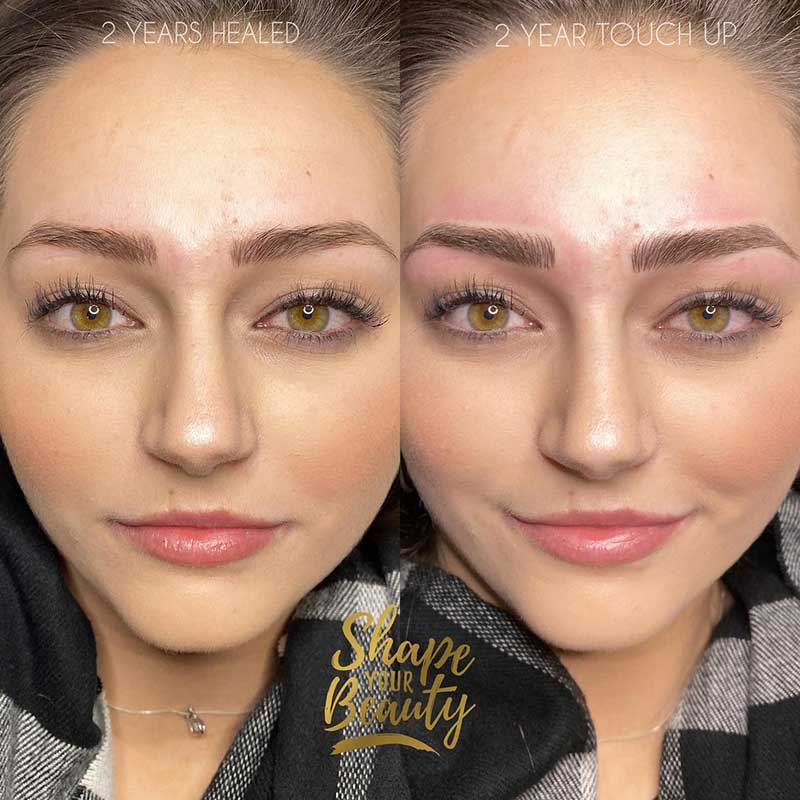 Do I Need More than One Touch Up?

If you want your microblading to last as long as possible, book regular touch ups.

The pigment will definitely start to fade away after some time and the speed of fading depends on your skin type and lifestyle.

If you’re not satisfied with your microbladed eyebrows and aren’t willing to try and get them corrected or wait out for them to fade naturally, you can try microblading fading or removal.

How Often Do You Have to Touch Up Microblading?

You can prolong your microblading by scheduling a touch-up appointment as soon as you feel like your brows are too faded.

For most people, there’s no need to touch them up more frequently than every 12 months.

If you have oily skin, the pigment will naturally fade away faster.

Also, people who spend a lot of time in the sun, in the gym, or swimming will probably have to book touch-ups more frequently. Certain skincare products can also accelerate pigment fading.

How Faded Does Your Eyebrows Microblading Need to Be Before You Can Retouch It?

There’s no definite rule on how faded the brows need to be in order to be retouched. It’s down to your own preference.

Bear in mind that the more the brows fade, the more work needs to be done during the microblading touch-up, which means the appointment will take longer, could cost more, and the healing period will be longer and more intense since there’s more trauma to the skin.

The first touch up is a must and you shouldn’t skip it. Otherwise, the whole treatment can be ruined and you have wasted your money. Other touch ups are optional but recommended if you want your microblading to really pay off and for the results to stay crisp.